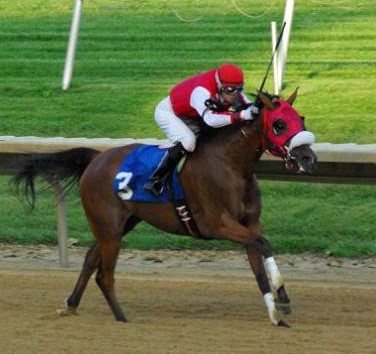 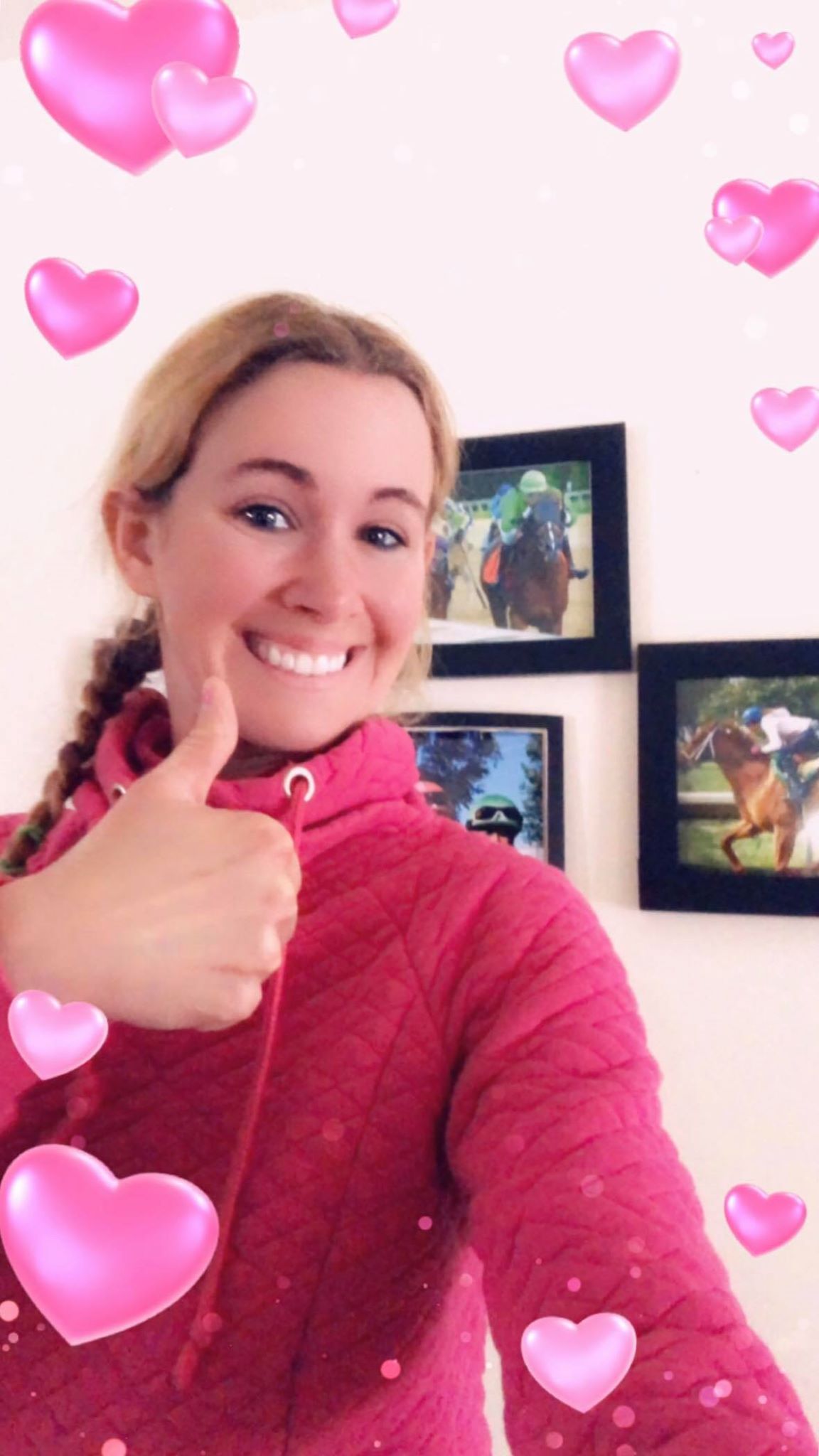 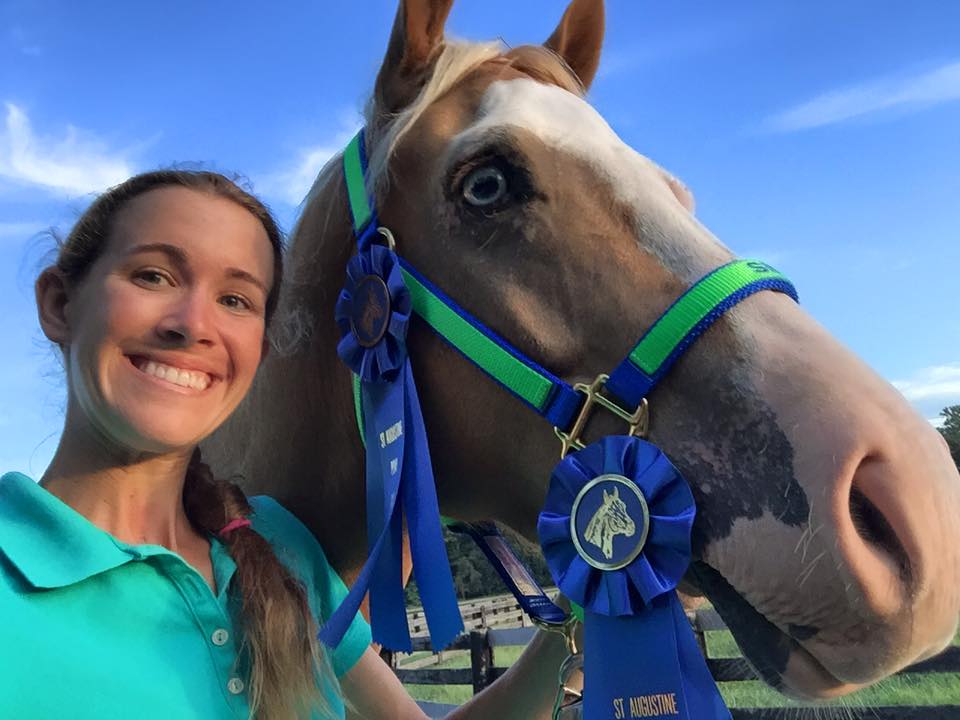 I last interviewed Kirsten Swan many moons ago, and when I found out she was still riding, I thought I’d do an update, so here it is:

FOTH: Did you imagine when you started riding, you still would be riding?

KS: Hi again, Footboy. Yes, but I never thought I’d be riding Arabians all around the nation instead of Thoroughbreds.

FOTH: Tell everybody what is the difference between Arabians and Thoroughbred horses.

KS: Arabians are little smaller & a little slower; most Arabians only have 1/4 kick down the lane unlike Thoroughbreds, who you can ask sooner. Arabians are super smart. They pick their people that they like, most riders don’t like to ride them because they can’t understand them. Arabians know how to outsmart certain people, lol. Not saying some Thoroughbreds aren’t the same, but usually Thoroughbreds will be like. “Ok I’ll do it, no matter who you are.”

FOTH: What tracks have you ridden Arabians at, and do you have a favorite?

KS: I have ridden at Delaware Park, Sam Houston, Retama, Dallas, Santa Anita, Oak Tree at Pleasanton, and Churchill. My favorite is probably Delaware Park, but riding at all of them was a neat experience, especially Santa Anita.

FOTH: For you personally, what have been the ups and downs in your riding career?

KS: Well, I started riding when I was 17, and started out pretty well in Ohio, then moved to Penn National few months later and was doing good there for a while. Then I got sick and got myself in trouble, basically had the rug pulled from under me. Then, I’d started galloping more and picking up a few mounts to get by. I had couple of my own horses for a while to run. I really enjoyed training and riding my own. I then decided to move tp Delaware, and that’s when I found myself in the Arabian group. It probably saved me from rock bottom, in that riding Arabians let me start race riding more, play assistant trainer, as well as travel the world with some of best Arabians. It’s been a great 7 years now.

FOTH: Now for those who don’t know, what is the job of the assistant trainer?

KS: An assistant trainer is someone who works under a horse trainer who takes care of the barn or travels with horses to other tracks, if the trainer can’t go. You basically do it all: ride, organize, travel, run, & saddle horses at the races.

FOTH: You have been riding a long time now. What has been the worst injuries you have had, and do you worry about that in the back of your mind? KS: The worst injury I had was a broken back when I went down at Penn National in 2011. I was out for 3 months. It healed well, and I went back to galloping & riding with no problems. No, I don’t worry about getting hurt, because when it happens it happens. I don’t have much control over it.

FOTH: How do you keep yourself motivated to keep riding after all this time?

KS: It is hard to keep yourself motivated in this game, because there are more downs than ups. I try not to let negativity of people get to me. I usually have that one horse that keeps me going. Truthfully that’s what gets me excited to ride; it makes me keep going forward.

FOTH: How long do you think you will keep riding?

KS: I’m pretty sure I’ll keep riding for a while. If I start training, I’ll still ride my own in races. Riding, in general, is my life. I’d be lost without it.

FOTH: What is the hardest thing about being a jockey?

KS: Probably every jockey has a different answer, but the hardest for me is not allowing people to tear you down. We all go through it as riders. Someone is always criticizing the way you ride. You can be best rider in the world, win 6,000 races, and still be told you can’t ride. So you have to learn to overcome the mental part of it, and keep going forward. Listen to the ones who give good advice, not to the ones who tear you down.

FOTH: If some young girl came up to you and said she wanted to become a jockey, what advice would you give her?

KS: First, I’d ask if they want to work 7 days/week, lol. It’s not an easy career. I’d tell them to work hard, but don’t rush into it. Stay strong, don’t let people discourage you. If someone is giving you advice, listen to them, even if it sounds crazy, because it might help you down the road on certain horses. If you need help, ask for it.

FOTH: What do you think, going forward, are some changes racing needs to have to get more people interested and to get crowds back to the races?

KS: Most tracks rely on the casinos to bring people in, which is ok if you like to gamble, but there a lot people who don’t, and most people forget that it’s a horse track. One of my favorite places which I admire is Texas horse tracks and how they bring in their crowds. They don’t have casinos, yet they have bigger crowds than what most tracks on the east coast do with casinos. They are always advertising something for the weekends, like $1 beer night every Friday. They have food trucks come in. One weekend, they have ostrich, camel, & zebra racing. They also have Wiener, Chihuahua, and Corgi dog races on other weekends. They do it between the horse races to keep people entertained. Also, what’s helping the horse racing during the past couple of years is having Triple Crown winners. It’s getting people more excited for our industry, so hopefully we can keep it going.

FOTH: Oh, that’s cool. Out of all the tracks at which you’ve ridden, is there one you weren’t a big fan of, and why?

KS: It’s between Mountaineer Park & Oak of Pleasant in California. I do not like Mountaineer. The surface was always sketchy, plus a lot of other things I won’t get into. Oak of Pleasant reminded me of a dirt bike track, lol. The only cool thing about that place is they have the fair going on during the races to bring people in. Both tracks backsides aren’t the greatest. They are a little dangerous with all the pavement there.

FOTH: Is there any track, or tracks, you would like to ride at one day?

KS: Not in America. I would like to ride in Abu Dhabi. They run backwards on the turf. That would be neat to do.

FOTH: Do you ever have any problems with your weight, or would like to see the weights being raised a bit?

KS: As bug rider, I had hard time with my weight, but now I can eat whatever I want. My issue is being too light sometimes. I don’t like carrying dead weight. I don’t think it’s a good idea to raise the weights.

FOTH: What are some things you like to do when you’re away from the track?

KS: I like to ride my own horses, and go to horse shows. Also, I like to hang out with my small group of friends and have game night or go karaoke singing and dancing.

FOTH: Are there any sport teams you follow, and if so, who?

KS: Not really. I try to kind of follow NFL since most of my friends are big into it and kind of keep tabs on what’s going on.

FOTH: Where do you see yourself going forward?

KS: Truthfully either training my own one day or totally off the race track.

CF: Kirsten thanks for doing this new, updated interview with me. Thumbs up! Any last words to wrap this up?

KS: No problem, and oh, kiss my feet footboy, lol. Thank you for the interview. It’s always a pleasure. Keep doing what you love and stay strong!!