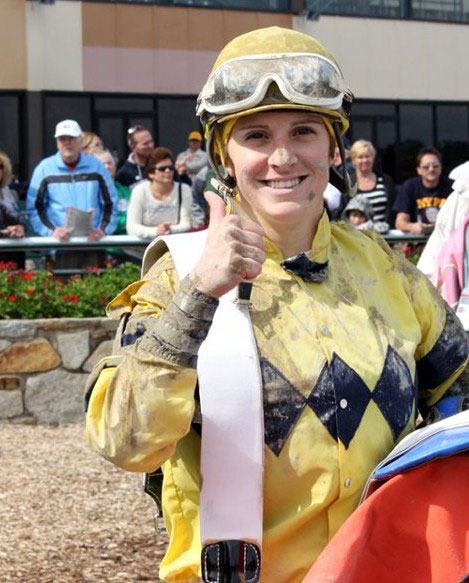 Maria Remedio took some time out while she was injured to conduct a new interview with me. Here is what she said to my questions:

FOTH: When I tell you that you have ridden in almost 3800 races and your purse earnings are over 12 million dollars, what thoughts go through your head?

FOTH: Now when you rode as an apprentice at Philadelphia Park (now Parx Racing), what are some memories you have of this time? You also rode one of your favorite horses during this time called Emperor Fusaichi.

MR: I was in love with Emperor. He was the true definition of when a horse clicks with a person the impossible happens. Henry’s Street was another horse, and I can’t remember how many races I won on either one of them, but it was a lot. Another highlight was winning the “Docent H. Black” Stakes for $ 75,000 on horse “Chase the Line”.

FOTH: At this point of your riding career, would you say you have found your own kind of riding style so to speak?

FOTH: When you started riding, did you think in the year 2018, you would still be riding?

FOTH: How hard has it been getting back into riding shape? I mean I have seen you, and you didn’t get fat or anything, but I know you have gained a few pounds since you got hurt over a year ago?

MR: It has been the hardest thing I have had to do. I have been going to the gym a lot and have been running a lot and working on getting my shoulders and upper body back into riding shape.

FOTH: So what was the feeling like for you to get 500 wins? Did you ever think when you started riding that you would ever achieve that?

MR: It was amazing. When I came close to the 500th win, it took me a couple mounts to achieve it. It felt like a black cloud over my head had lifted. I had my family following me from track to track to be there for my celebration. When I actually won it at Parx, it was perfect. I was riding for one of the best smaller, under-rated trainers at Parx, for whom I have won many races, and I had a great connection with. It was all perfect.

FOTH: So, how about the day you had 4 winners in a row and then followed that up with a win the next day on your next mount, so you had 5 winners in a row. What was the feeling like for you on that day?

MR: I was freaking out inside, I couldn’t believe it was happening. It was like no matter what I did on those horses, it was all just perfect. After the 3rd race, my horse fell down after the wire dislocating my shoulder. So the last 2 horses I won with, it was basically just me holding on. I was meant to ride one more, but I was in too much pain to continue.

FOTH: Now everyone knows Parx is your home track, but I am going to throw out some names of a few other tracks at which you have ridden, and I want your opinion on them, ok?:

MR:  Delaware Park: My home, where I actually got started riding. I love this track.

Atlantic City Race Course: I won the meet there one year; my favorite type of race is turf, so I enjoyed this meet, even though it was a short meet.

Saratoga: Too many people for me; craziness.

FOTH: Looking way back in 2007, you went to Hoosier Park to do a female jockey challenge along with Joanne McDaid and Tara Hemmings who were also riding at Parx at this time. What are some memories you have of this, and how much fun was that for you?

MR: I was with my best friend Joanne McDaid, and we actually did well. They (the track) treated us all like “queens.”

FOTH: (funny question time) Now you have a nickname for me (footboy) that you made just for me after the 2011 Parx Female Jockey Challenge a few years back. How did you come up with it, and how fun is it for you to call me it after all these years? Now I have hundreds call me that these days.

MR: Footboy is perfect for you. I had you kiss my feet after the 1st female jockey challenge we did when I announced I was retiring (she actually did for about a year before coming back to riding full time in 2012-cf). I don’t mind calling you that, because I know you enjoy it.

FOTH: I know you’re a big Dallas Cowboys (football) fan. Do you see them winning the Super Bowl anytime soon?

MR: I love the Cowboys. I always want them to win, but it is more a rivalry thing with the Phila Eagles than anything else.

FOTH: You had a bad accident at Delaware Park a few years back. Do you remember much about it these days?

MR: Yes, I remember everything about it. It was insane.

FOTH: Recently we just had another Triple Crown winner (Justify). In your opinion, just how special of a horse is he?

MR: He is a great horse, but I am an American Pharaoh fan.

FOTH: Looking back, do you think you were a good, or great, apprentice rider?

MR: Honestly, I don’t know. I think I made my mistakes like we all do, but I did very well, better than I give myself credit for.

MR: Wow, you are asking me to think back a long time ago now. I don’t know how many concussions I have had, lol. I cannot even remember. I do know I have always felt comfortable on a horse and going fast. I might not have looked pretty, but I loved racing.

FOTH: Are jockeys one of, if not the most underappreciated, athletes in sports?

MR: ABSOLUTELY! Look at the athletes that play football, basketball, baseball, and even hockey. They are making millions of dollars, and we are making peanuts compared to most of those athletes in the 4 sports I mentioned.

FOTH: Would you like to see the weights go up a pound or 2 for jockeys, or are they good right the way they are?

MR: I think the weights are great the way they are now. They were too low, but they raised them, so they are better.

FOTH: You have been riding since 2005, now that you’re a little bit older, do you have to really watch what you eat?

MR: Only when I get hurt do I have to watch what I eat to get back to racing, but then I maintain my weight rather well.

FOTH: Do you think overall you have been treated pretty fairly as a jockey?

MR: I can’t answer this question honestly. If I ever wrote a book, it would be a best seller (smiles). (you should maria-cf)

FOTH: Besides riding and being a football fan, do you follow any other sports at all?

FOTH: Out of all the horses you have ridden, do you have a favorite and a few other special horses that you really bonded with?

MR: I have a favorite absolutely: Emperior Fusaichi and a couple others I have bonded with along the way.

FOTH: When the day comes that you actually retire, could you see yourself ever becoming a horse trainer or horse owner one day?

MR: Yes. That is what all the big tracks do, and I think it is a much needed thing.

FOTH: Do you think in certain cases, besides the horse or horses, that more publicity should go to the jockeys, since they are the ones who pretty much never retire for years unless it is injury related?

MR: I am not sure what they could do, to be honest.

FOTH: Looking back, if you didn’t become a rider, what do you think you would have done with yourself as a career?

MR: I have no clue, but now I am older I would become a teacher. Inside in with heat in the winter, inside with air conditioning in the summer. Plus, summers off, as well as holidays. Being a single mom with 2 children and sacrificing time with them is horrible.

FOTH: (another funny question) Do you enjoy torturing me as much as I think you do? (ha ha). Is there going to be more puckering up for me in the future, lol?

MR: Oh hell yeah. Oh, this time as a special treat, Christopher, I am going to walk around barefoot for a while outside just for you before you kiss ‘em! Doesn’t that sound great? I know I will enjoy watching you squirm. And don’t worry, everyone, we will make sure they get posted on Facebook!

FOTH: Well Mr. Forbes is out of questions. Thumbs up as always, Maria, for doing another interview for my website. Any last words to wrap this up?

MR: Footsie Forbes, you will see my feet soon. lol